Here are a few terms and concepts that must be understood before moving forward.

The genome is the complete set of genetic material in a cell. 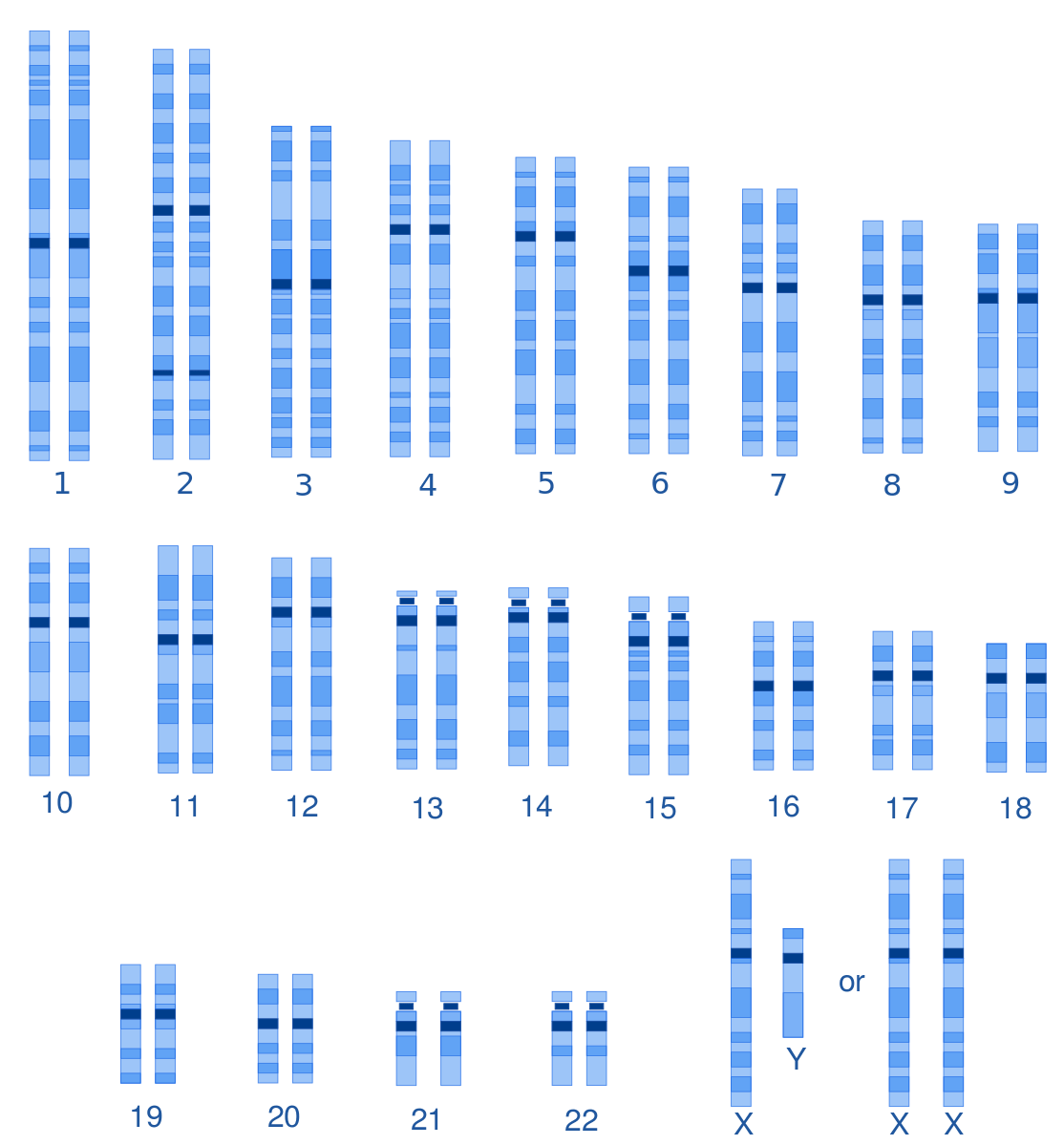 Genome by Mikael Häggström has "No Known Copyright"

A genotype is a set of genes responsible for a specific trait. In the image below, a gene is represented with the letter "S". A capital "S" is a gene slightly different than the lowercase "s", and thus would lead to a different phenotype. 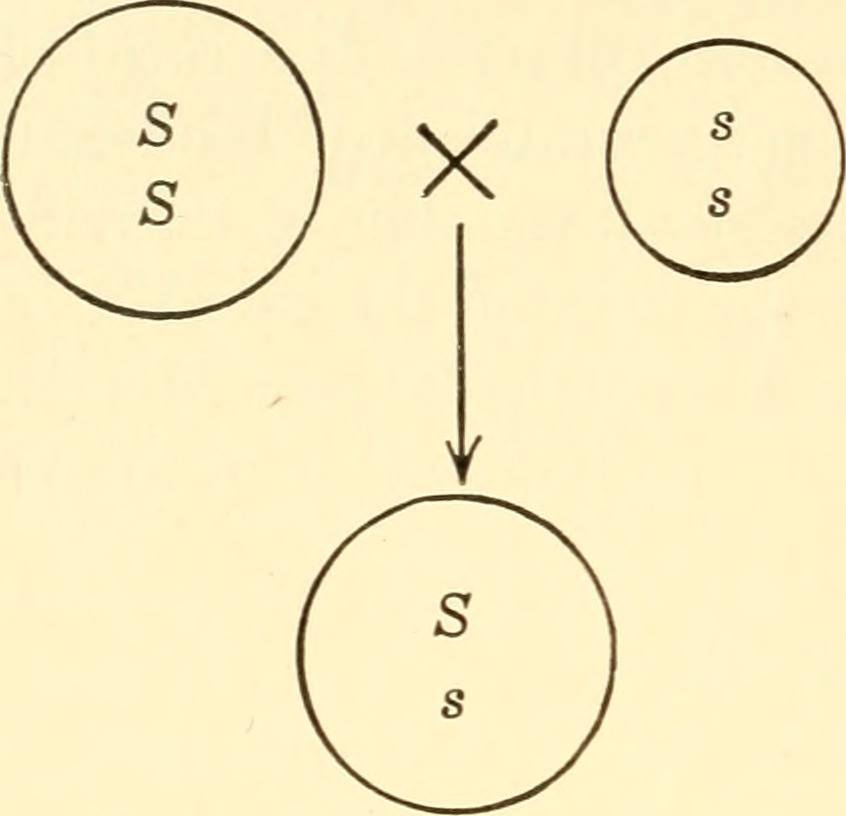 Genotype by Internet Archive Book Images has "No Known Copyright" 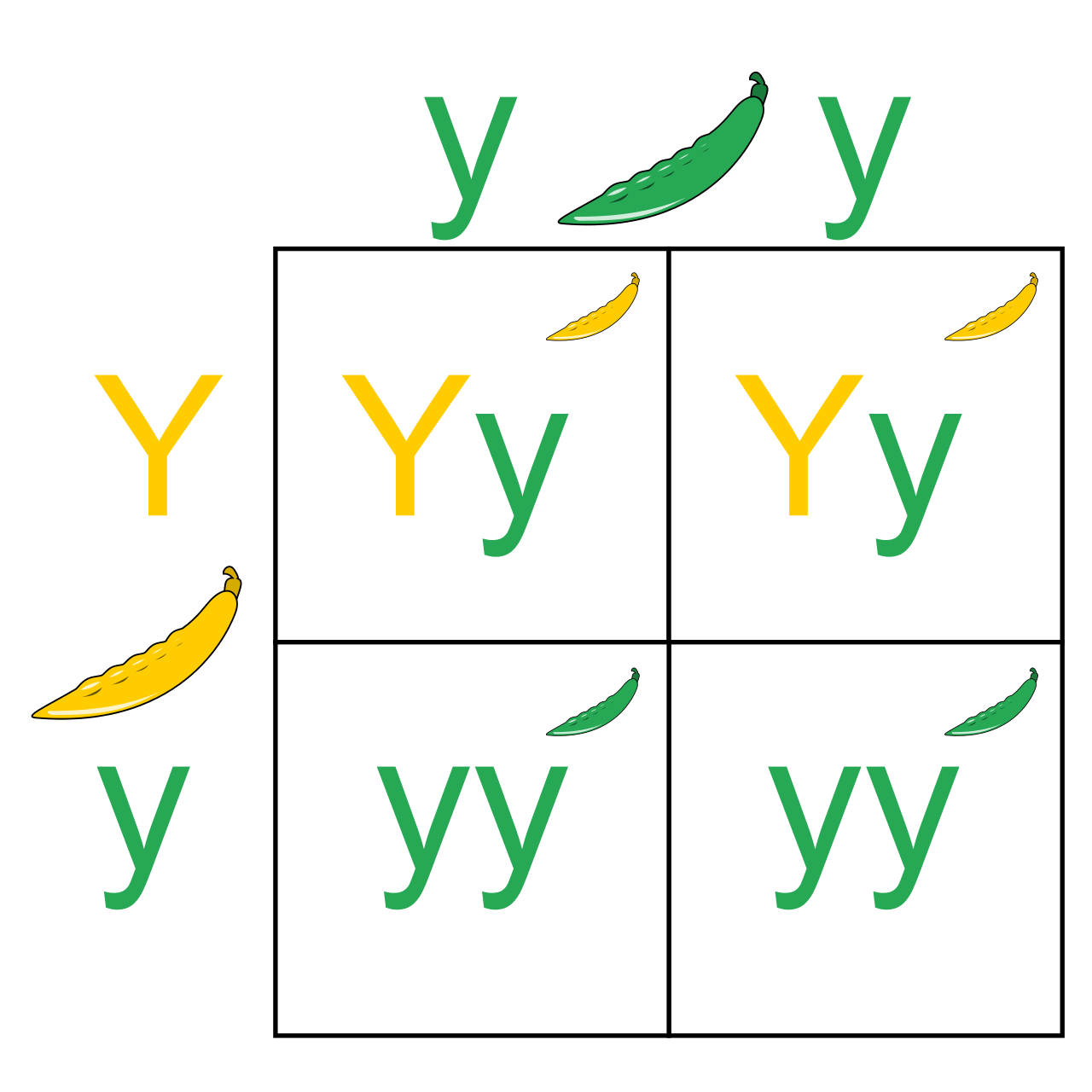 A gene is a sequence of DNA that codes for a functional molecule. The introns in the genes are not expressed, but the exons are expressed. 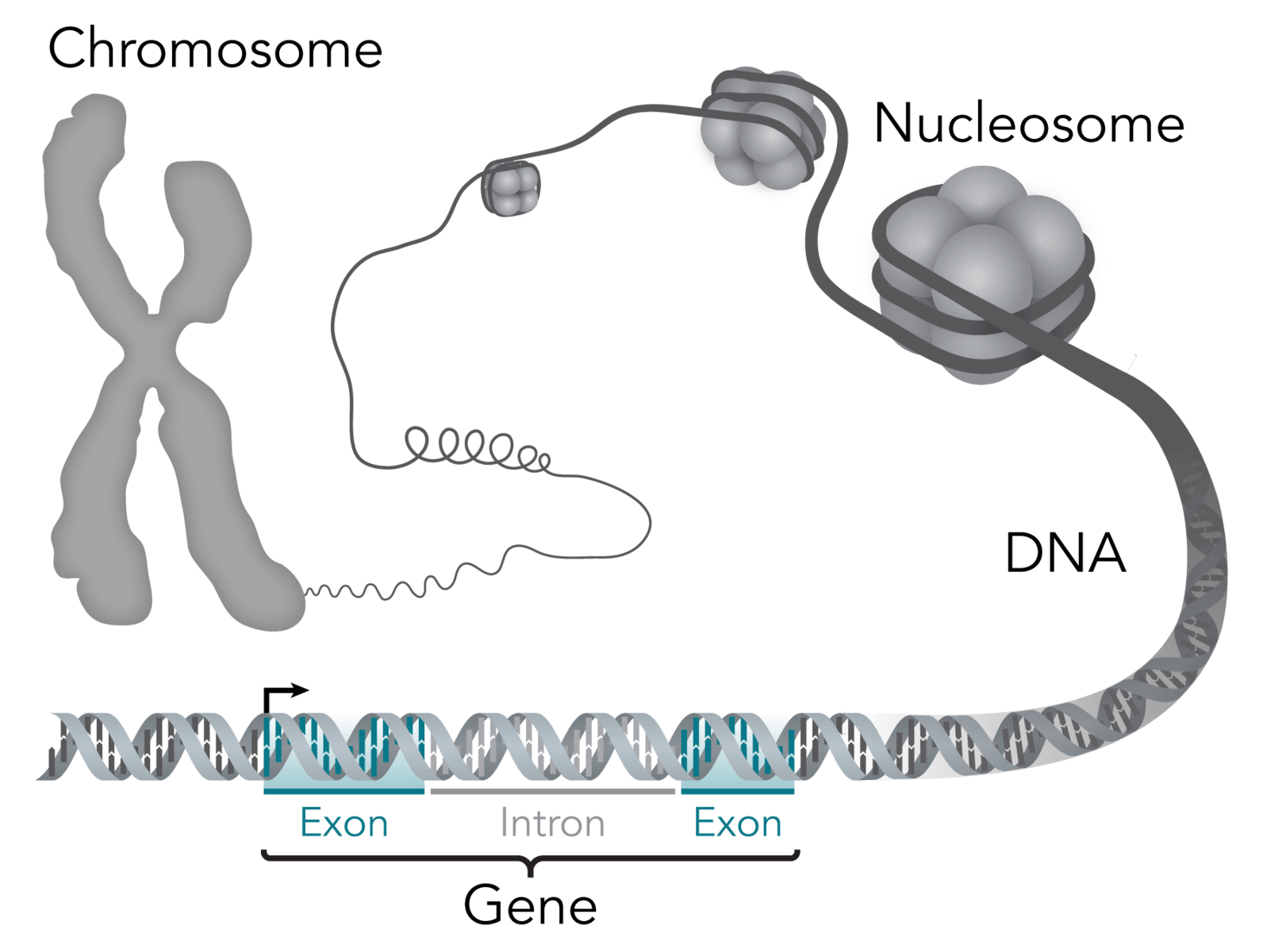 Gene by Thomas Splettstoesser is licensed under CC BY-SA 4.0

The genetic code is a set of rules a cell uses to translate information encoded in the DNA into functional proteins. By examining the imge below, we can see that combination of 3 nucleotides is responsible for one amino acid.

The genetic code is also described as redundant, because each amino acid can be coded for by multiple different codons.

The genetic code also does not overlap, so each codon can only be responsible for one single amino acid.

The genetic code is also universal, so this table demonstrating the specific link between each codon and amino acid applies to all living organisms.

Genetic code by Sarah Greenwood is licensed under CC BY-SA 4.0

A codon is a single unit of genetic code. It is composed of 3 nucleotides. There are multiple (hundreds or even thousands) of codons in a single gene. This codon that is composed of three nucleotides is the building block of the functional molecule that will be synthesized.

Codon by Sverdrup has "No Known Copyright"

DNA replication takes place during the “S phase” of the cell cycle. It’s important that all of the genetic material is properly replicated so that each daughter cell gets one complete copy of the genome.

Here is a visual representation of a DNA double helix. Notice how the two strands are anti-parallel. This is very important, because as you’ll see below, DNA polymerase can only copy DNA while moving in one direction. That direction is 5’ to 3’. And since DNA consists of anti-parallel strands, the DNA polymerases will be working in opposite directions on each strand.

DNA double helix by Genomics Education Programme and modified by Mohsen Alayche is licensed under CC BY 2.0 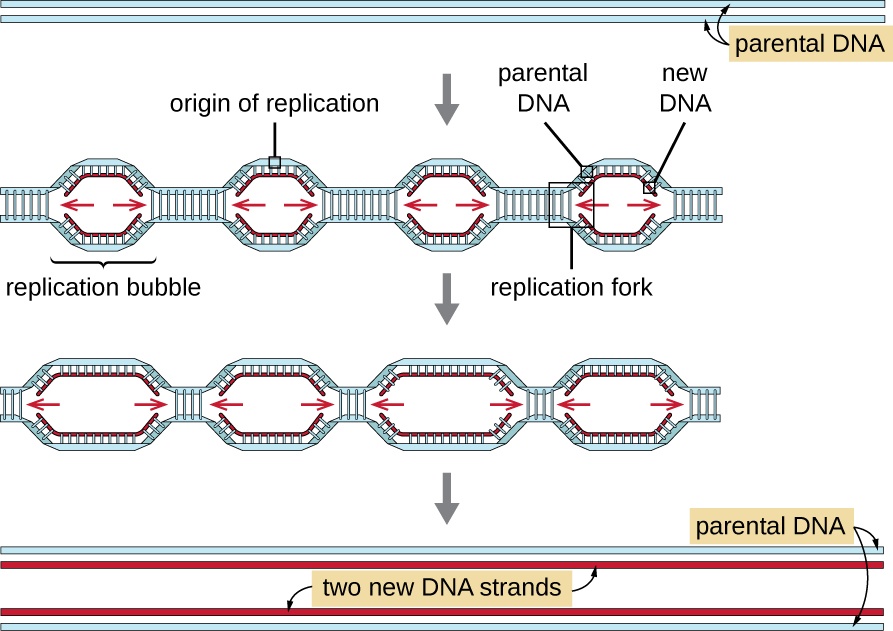 Origins of Replication by OpenStax is licensed under CC BY 4.0

As mentioned previously, the DNA double helix is anti-parallel. This means that when the two strands are seperated, there is one strand that is 5' to 3'. While the other strand is 3' to 5'. DNA polymerase III is the enzyme responsible for the elongation of the new DNA that's being synthesized, but it can only work by adding DNA in the 5' to 3' direction. And since the new DNA also has to be anti-parallel, the DNA polymerase has a slightly different approach when elongating the two strands of DNA.

1) The leading strand: DNA polymerase can bind and synthesize the new strand of DNA in the same direction of the replication fork.

Replication Fork by Masur and modified by Mohsen Alayche is licensed under CC BY-SA 3.0

In this step, the new DNA is being synthesized and elongated. Here is a summary of the important proteins and terminology involved:

1. Helicase - Enzymes that untwist the DNA double helix at the replication fork

2. Topoisomerase - Enzymes which prevent the "overwinding" of the DNA ahead of the replication fork. They release tension.

3. Single-strand binding proteins - They binds to the single strands of DNA to stablize them.

6. DNA polymerase I - Replaces the RNA made by the primase with new DNA.

DNA replication by Mariana Ruiz has "No Known Copyright"

In eukaryotic cells, DNA replication is initiated at many different locations simultaniously to speed up the process. As the replicaiton progresses, the replication forks eventually meet and terminate at many points in the chromosome.

However, since eukaryotes have linear DNA, the replication can't reach the very end of the chromosome. The lagging strand requires a DNA polymerase to bind first before forming an Okazaki fragment, but when you get the tip of the chromosome, there isn't enough room to add a DNA polymerase and therefore a small part of the DNA is not copied. Therefore, after each DNA replication cycle, some DNA is lost.

To help prevent the loss of important genetic material, the end of our chromosomes have regions of repetitive DNA that doesn't containt important information. This region is called a telomere. A telomerase enzyme adds and lenghtens telomeres to prevent the DNA shortening from causing damage.

Ribonucleic acid, also known as RNA, plays a major role in the coding and regulations of genes. RNA belongs to one of the four major macromolecules essential to life, nucleic acids.

RNA and DNA have much in common but they have three major differences.

1) RNA is typically single stranded while DNA is double stranded.

2) RNA has a ribose, while DNA has a desoxyribose.

3) RNA does not have a thymine molecule (T), instead, it has a uracil molecule (U).

RNA and DNA by Sponk is licensed under CC BY-SA 3.0

As mentioned previously, RNA can have many functions, here are some examples:

1) mRNA = Messenger RNA, it is a copy of the DNA, and serves as a template for protein synthesis.

3) rRNA = Ribosomal RNA, it is a part of the ribosome structure.